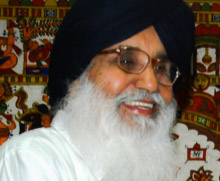 Rahil Nora Chopra : 93-year old Shiromani Akali Dal’s five-times chief minister and one of the Punjab’s tallest leaders, Prakash Singh Badal who was among the NDA’s oldest allies and had quit NDA and the Modi govt at the centre in September 2020 against the farm laws, has written  a letter to President Ram Nath Kovind for returning his Padma Vibhushan. The country’s second highest civilian award was given to him in 2015.