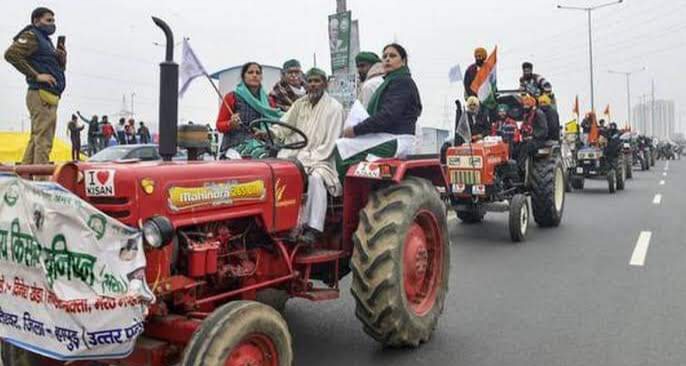 By 1stnewz Staff : The National capital is set to witness a massive tractor rally led by farmers on Republic Day. The farmers union has reached an agreement with the Delhi police to carry out the tractor march peacefully on Republic Day. Three routes were finalised. The rally will be held from Delhi's three border points -- Singhu, Tikri and Ghazipur -- and adequate security will be provided to it, police said. Hundreds of farmers from western Uttar Pradesh, Haryana, Punjab, Rajasthan and Madhya Pradesh will arrive in the tractor parade. As per officials, the rally at Ghazipur border will be about 50 kilometers long, 100 kilometers long at Singhu border and 125 kilometers long at the Tikri border. In total, the tractor rally will be 250 kilometers long.

The Sanyukt Kisan Morcha Sunday said only tractors and trolleys with tableaux will be allowed in the march, no one should carry a weapon, not even sticks and maximum of 5 people can ride on one tractor. "No one will ride on the bonnet, bumper or roof of tractors," it said in a statement.

"The tractor rally at Ghazipur will go up till Akshardham Temple and return back. The speed limit has been fixed at 10 kilometers per hour. No outsider will participate in the parade, only the registered tractors will be allowed," said BKU chief Rakesh Tikait.

Police said more than 7000 tractors from Tikri border, 5000 from Singhu and 1000 from Ghazipur will join the rally. "More tractors are coming in. We have faith that our farmer brothers will return to the border peacefully," said special CP Dependra Pathak.

"The rally will start at 11am after an ardas (prayer)," said Jitendra Singh Jitu, spokesperson for farmers.